The nature and the identity of the initial substance have somewhat changed in the folowing situations.

When a Magnesium ribbon is burnt in Oxygen, it gets converted to Magnesium oxide. This description of a chemical reaction having long form. So it needs to write Word-equation.

Now, by recalling the formulae of magnesium, oxygen and magnesium oxide, the above word-equation can be written as –

Conservation of mass: Mass can neither be created nor destroyed in a chemical reaction.

In other words, the number of atoms of each element remains the same, before and after a chemical reaction. Hence, we need to balance a skeletal chemical equation.

Now count the number of atoms of different elements on both sides of the arrow mark.

Let us try to balance the following chemical equation –

To balance the oxygen atoms –

The equation would be –

Now we have to balance Fe.

To equalise Fe, we take three atoms of Fe on the LHS.

Finally, we have to to check the correctness of the balanced equation. Let’s count atoms of each element on both sides of the equation.

The numbers of atoms of elements on both sides are
equal.

This is a balanced chemical equation.

This method of balancing chemical equations is called Hit-and-Trial (HT) method as we make trials to balance the equation by using the smallest whole number coefficient.

Now the above equation will be,

Sometimes the reaction conditions, such as temperature, pressure,
catalyst, etc., for the reaction are indicated above and/or below the arrow
in the equation. For example –

The reaction in which a single product is formed from two or more reactants is known as a combination reaction.

In this reaction, calcium oxide and water combine to form a single product, calcium hydroxide.

Calcium hydroxide reacts slowly with the carbon dioxide in air to form a thin
layer of calcium carbonate on the walls. Calcium carbonate is formed after two to
three days of whitewashing and gives a shiny finish to the walls.

The chemical formula for marble is CaCO_{3}.

(i) Burning of coal

Exothermic Chemical Reaction: The reactions in which heat is released along with the formation of products are called exothermic chemical reactions.

(i) Burning of natural gas.

(ii) Respiration is an exothermic process.

(iii) The decomposition of vegetable matter into compost is also an example of an exothermic reaction.

The reaction in which a single reactant breaks down to give simpler products is called decomposition reaction.

This reactions are used in black and white photography.
We have seen that the decomposition reactions require energy either in the form of heat, light or electricity for breaking down the reactants.

Endothermic reactions: Reactions in which energy is absorbed are known as endothermic
reactions.

The reaction in which an element displaces or remove another element from from a compound is known as displacement reaction.

The iron nail becomes brownish in colour and the blue colour of copper sulphate solution fades.

In the above reaction, iron has displaced or removed another element, copper, from copper sulphate solution.

Zinc and lead are more reactive elements than copper. They displace copper from its compounds.

The reactions in which there is an exchange of ions between the reactants are called double displacement reactions.

Here, the white precipitate of BaSO_{4} is formed by the reaction of SO_{4}^{2-} and Ba^{2+}. The other product formed is sodium chloride which remains in the solution.

When one reactant gets oxidised while the other gets reduced during a reaction, such reactions are called oxidation-reduction reactions or redox reactions.

When we heat a china dish containing cpper powder, it becomes coated with black copper(II) oxide.

This is because oxygen is added to copper and copper oxide is formed.

If hydrogen gas is passed over this heated material (CuO), the black coating on the surface turns brown.

Oxidised: if a substance gains oxygen or loses hydrogen during a reaction, it is oxidised.

Reduced: If a substance loses oxygen or gains hydrogen during a reaction, it is reduced.

1.3 HAVE YOU OBSERVED THE EFFECTS OF OXIDATION
REACTIONS IN EVERYDAY LIFE?

When a metal is attacked by substances around it such as moisture, acids, etc., it is said to corrode and this process is called corrosion.

Rusting of iron:- The iron articles are shiny when new, but get coated with a reddish brown powder when left for some time. This process is commonly known as rusting of iron.

When fats and oils are oxidised, they become rancid and their smell and taste change. This process is called rancidity.

A Spicy Content Writer by Mind and a Professional Blogger by Heart. Having M. Sc. in Physics from Angul Autonomous College, Angul, Utkal University. The Backbone of Qik Max Blog Hub with Much more....

The below comment section is waiting for you. Please put your valuable questions there.

Edbod is an education hub to provide you the best and linear education materials. Here you will get the notes, exercises, activities as well. All the study materials dare in simple format with daily used examples.

Our main aim to provide you the free study materials. You can take your super availabilities time to take part with MCQs. 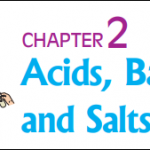